I love art, design, visual thinking and the world of the senses. I especially love the creative process that occurs while in these spaces. And they really are spaces—the mundane disappears and you are in a place of flow and creation. It’s a good reason to be alive.

I want to tap into the creative process and try to ‘see’ it—stop it in its tracks and peek behind the curtain. My attempt to write about this magical, invisible process and all the tiny miracles that emerge from it, is my way of catching a glimpse of the mystery.

Everything I love to do most relates to creativity. I try to create something new every day. If it’s not on paper or canvas it’s in the digital space at ImageSwim.

A land good for dreaming is… a line from a poem by Octavio Paz. This line is a portal to my favorite space–the space where creation happens.

Making art from the beginning of time

In the last few years I have been playing with the idea of the beginning of time in my art. Its a kind of creationism-evolution space in time. Specifically, the few years after the seven days of creation and long before the dinosaurs. In this world birds are the first life forms and are the containers for the human soul. Poetically, I imagine it as a time when everything, especially our souls, were pure.

The beginning of time theme began when I was playing with the idea of the history of gardens. The first scene I drew was Eden and it started with a bird carrying the first seeds to scatter around a plant-less world. The bird would then visit cultures at different points in history.

As I worked on the art for the beginning of time I would go to this visual mind space and enter a portal. What I mean by portal is, I was in a space like a waking dream that was built from the visuals and words I was expressing. I could see it and felt surrounded by it. This portal led me to a deep space in myself that felt like time primeval. It was this ancient, yet timeless, feeling that seemed vast and was made of pure white light. It felt like the beginning of time to me. I think an important ingredient to entering this space was the component of feeling awe and endlessness inspired by the original idea.

The best thing about this experience was the realization that I could return to this space at anytime. As long as I started with the visuals of that space of the beginning of time and then connected to the feeling I could get there.

Here is some more of the work I did when traveling back into that portal. I imagine it’s written by one of the human soul birds. 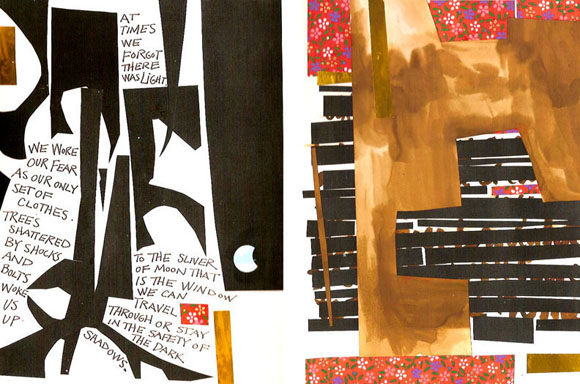 At times we forgot there was light.

We wore our fear as our only set of clothes.

Trees shattered by shocks and bolts woke us up

or stay in the safety of the dark shadows. 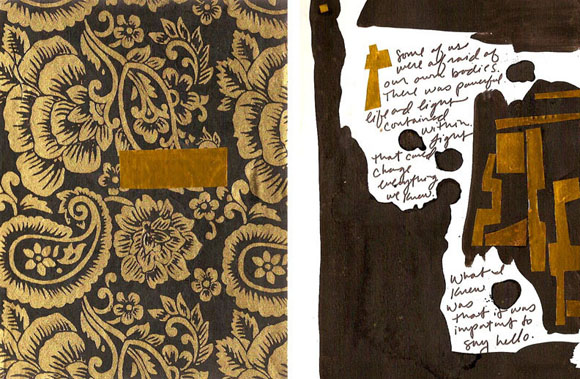 Some of us were afraid of our own bodies.

There was powerful life and light contained within.

Light that could change everything we knew.

What I knew was that it was important to say hello. 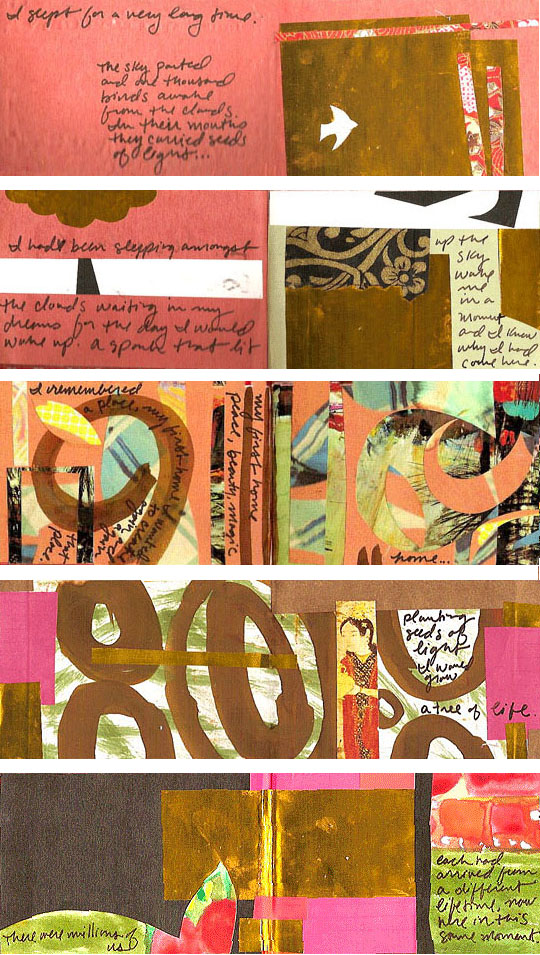 I slept for a very long time.

The sky parted and one thousand birds awoke from the clouds.

In their mouths they carried seeds of light…

I had been sleeping amongst the clouds waiting in my dreams for the day I would wake up.

A spark that lit up the sky woke me in a moment and I knew why I had come here.

I remembered a place, my first home…

Planting seeds of light I would grow a tree of life.

There were millions of us.

Each had arrived from a different lifetime, now here in this same moment.