I love art, design, visual thinking and the world of the senses. I especially love the creative process that occurs while in these spaces. And they really are spaces—the mundane disappears and you are in a place of flow and creation. It’s a good reason to be alive.

I want to tap into the creative process and try to ‘see’ it—stop it in its tracks and peek behind the curtain. My attempt to write about this magical, invisible process and all the tiny miracles that emerge from it, is my way of catching a glimpse of the mystery.

Everything I love to do most relates to creativity. I try to create something new every day. If it’s not on paper or canvas it’s in the digital space at ImageSwim.

A land good for dreaming is… a line from a poem by Octavio Paz. This line is a portal to my favorite space–the space where creation happens.

Under the surface and the artists consciousness

Posted by Jacqueline Wadsworth in IDEAS AND ART

A painting is a record of the artists consciousness. Accumulated moments of process fuse together and when complete, form a record of experience.The painting becomes a map of time spent, recognizable only to the painter. It’s not like a photo that captures an instant, but more like a series of actions documented in visual language. As time passes and we look back on our work, we can see how our consciousness has evolved and sometimes even the meaning of our paintings.

When I first painted Underwater Fish Kiss a few years ago I became deeply involved with the phrase ‘under the surface’. These words evoked a feeling of mystery and the subconscious for me. The original inspiration for the painting came directly from my artist statement:

“I am interested in what lies beneath the surface of our experiences. My work attempts to translate our inner life into symbols then narrative, not to convey specific events, but to describe interior experience, through the language of symbols.” 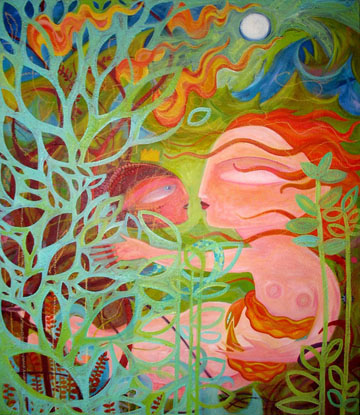 In other words, something happens to me in life and I try to depict it through symbols focusing on my ‘under the surface’ response. The hope is that the initial event that inspired the painting moves from being my  personal experience to a universal theme that everyone can relate to.

At the time this painting was about invisible energies exchanged between two beings, the fish and the woman, in a secret under the surface world.

I noticed a year or two later how this original idea had changed for me. I was looking at an old notebook and found a quote from Joseph Campbell that struck me. Mythology is often used as a source for my art, hence my love of Joseph Campbell. His words “going into a depth” triggered a vision of Underwater Fish Kiss:

“All these mythologies give us the same essential quest. You leave the world that you’re in and go into a depth or a distance or up to a height. There you come to what was missing in your consciousness in the world you formerly inhabited. Then comes the problem of either staying with that and letting the world drop off, or returning with that boon and trying to hold on to it as you move back into your social world again. That’s not an easy thing to do.”

I read this and Fish Kiss took on new meaning. I imagined the women had descended to the underworld and would soon return with an experience of the eternal. She is wearing an ouroboros around her torso which symbolizes totality and power that eternally consumes and renews itself. My consciousness had shifted and the painting was reflecting themes that I was now contemplating  in my life–power and the idea of “my end is my beginning”. This was not the case when I painted it, or at least the themes were not yet conscious.

Last year, the meaning changed for me once again, or should I say deepened. This time the ‘under the surface’ theme came as a feeling I had experienced. I had just returned from a week retreat of deep meditation where, as Joseph Campbell says, the ‘world drops off’. During  the first few days of my return I would experience the feeling of going beneath the surface of things. It felt like I would submerge, relax in that feeling, then swim back up to the surface through a cave. The cave was a portal back to this world–the same world I had left, on this same planet, but all of a sudden everything I perceived was strange and magical.

Fish Kiss had now become the symbol of an experience I was having years after I painted it. The woman had become me and I was experiencing her world.

A  painting is a mirror of the consciousness of whoever is looking at it. Of course, this would also hold true for the artist viewing his own work. Through these experiences and shifts in perception I see the painting can be a still point of reference in time  through which the artist can trace the evolution of their own consciousness and bring deepening layers of meaning to what they create.